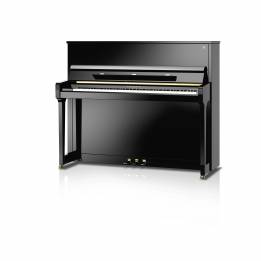 Two brothers, Wilhelm and Fridolin Schimmel were talented piano-craftsman. They were both dedicated to quality and craftsmanship.

Both brothers were renowned for their expertise and quality.

In Germany, Wilhelm Schimmel stayed with pianos only. So will his son, Wilhelm Arno Schimmel and also his grand-son Wilhelm Nikolaus Schimmel. As a young man Nikolaus Schimmels took a similar path to Fridolin and worked as a piano technician in Chicago, later also in other American piano companies. In the 1960 ́s the family relationship and the early activities of Nikolaus Schimmel helped to re-establish the Schimmel brand in North America.

The new Fridolin Schimmel grand and upright pianos have been especially developed by Schimmel for the educational level of the market. Solid, robust and affordable as an excellent alternative to both, students and family due to the favorable price-performance ratio.